Life by the Sea

Finding the Language of Flowers

Sometimes a book shifts something within and makes you look at the world differently. Other times, a cover lures you. As a writer, I choose novels I feel will be a worthy investment of my reading time. ‘The Lost Flowers of Alice Hart’ by Holly Ringland did more than that – I took that journey with Alice, learned the language of flowers and found my own.

This year, the winter solstice arrived and put an end to weeks of much needed rain, revealing the bluest sky that was full of possibility. I was a third of the way through Ringland’s novel, when, in the company of my four-legged girl and another dog I was minding, I decided to take my walk into the bush rather than along the beach. I felt like the child version of Alice in Ringland’s story who was enticed by the pathway that led through the bush to the river. As I walked, like Alice, the bush embraced me, and I needed to be nurtured. 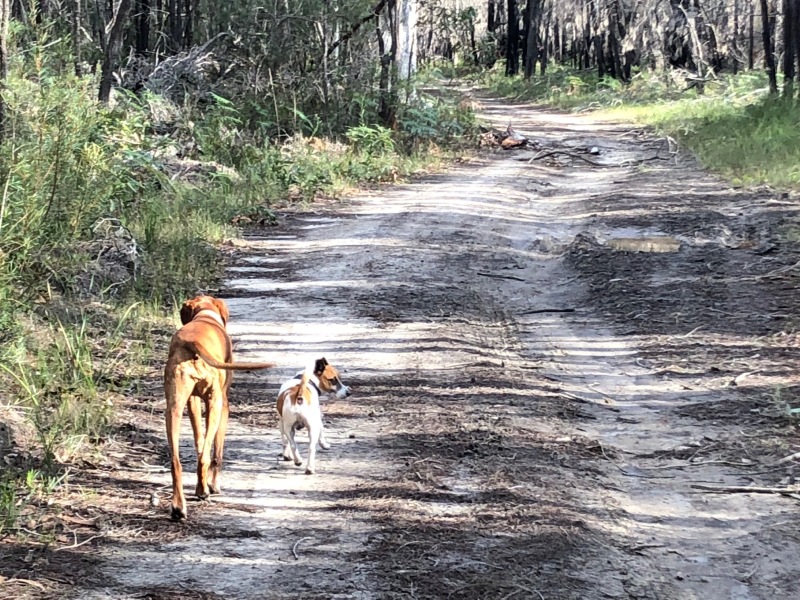 An Unlikely Pair: Mali (my girl) on left with Tiger

The earth had been washed clean leaving generous puddles that divided the tracks. Water, held in bowls of clay, would last the months ahead, ensuring the birds and marsupials flourish. Pools tinged aqua on their edges reflected the green foliage above.

I took the ‘Black Swamp’ track and came to where the path divides in three. I realised I had previously only ever gone left or right. On this day, I went straight ahead, towards the area that had been razed by  fire nearly two years ago. The landscape changed from the sandy forests where great silver gums pointed to a previous time. Wide-girthed eucalyptus trees revealed their age. Heavy branches of one, supported in the bough of another, creaked like the rusty hinges of a door… uncertain of allowing me access. I climbed a gentle slope and realised one particular eucalypt was scarred – a powerful reminder of the original custodians, the Jerrinja. A hidden secret that belongs to the Saltwater People and their ancestors. 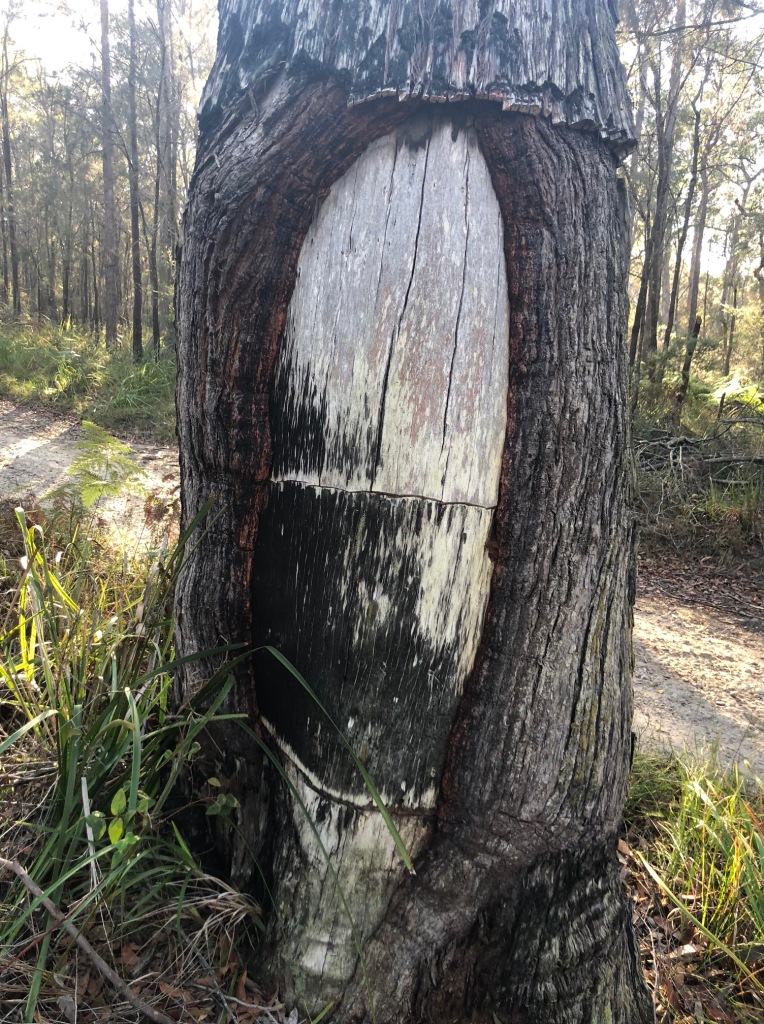 Down into the boggy marshes where frogs gathered in a croaking choir. I picked my way through, trying to keep my feet dry. And then the path climbed, steeper this time. My phone’s satellite map told me of my location – a pulsating blue dot enclosed by trees. The dogs, nature and me. I had found the solace I was looking for. I breathed in huge lungsful of fresh air and felt the happiest I had in a long time.

But something tugged at me to go further, deeper, just like the new scents that drove the dogs onwards. Blackened trunks became embedded in the brightest green undergrowth. The bush thinned and it was then that I came to a halt. A sweet honey aroma of wildflowers took me to an unfamiliar place. Wherever I looked, I saw their exquisiteness in varied colours and forms. Fragile yet hardy. I imagined myself as Alice, examining their beauty. But instead of putting them into my pockets, I took photographs.

Colours of orange, red and yellow …

Tiny stamens called for the birds, the bees and the breeze to carry their lives forward. It was as though the flowers were speaking ever so eloquently. Just as Ringland suggests –flowers are the words to express our thanks, our love, our sympathy. 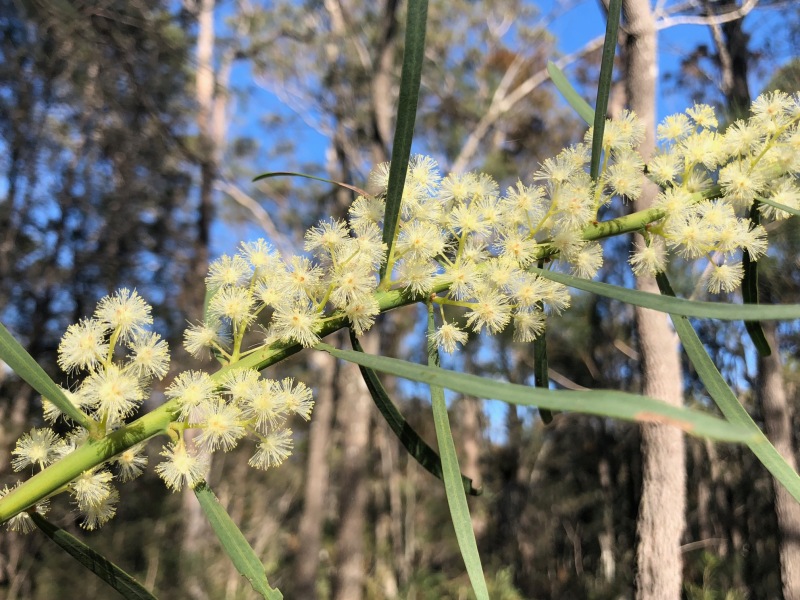 Feeling the freedom of life without time restrictions, I explored the essence of the bush for hours, until, urged by hunger, I decided to return. As I neared the quaint village of Myola, I was reminded of the callous nature of humans who use the track to discard unwanted objects that would never decompose. And a sadness tried to find its way in but I thought of Alice and her flowers and the beauty held deep within the bush. I arrived home and wanted nothing more than to finish the book. As with Alice, Holly Ringland’s novel evoked a fire that burns within my own heart, encouraging me to find the words and trust my own stories.

A few weeks later, I walked back to the place of wildflowers. The flowers I’d seen earlier had mostly fulfilled their lives and the colours of red and orange had faded. Instead, there were pinks and purples. And once again, I was entranced by the language of flowers and they spoke of happiness and peace. 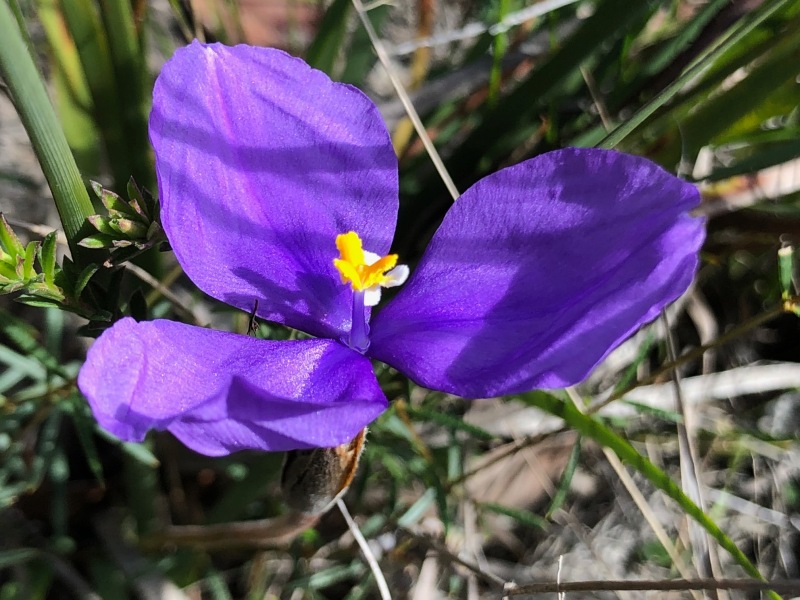